Despite the gold pan that has always graced our county seal and the large mining mural that can be seen in the main staircase of the county courthouse, for the first time in decades, Josephine County has finally officially recognized its mining roots.
The Josephine County Board of County Commissioners issued a proclamation declaring June 15th, 2011 as “Mining Recognition Day” in honor of the 160th anniversary of the first recorded discovery of gold in Oregon. Also recognized was the influence of early miners in the Illinois Valley on the drafting of the first written mining law in the Far Western States, as well as the role of local miners in not only the creation of Josephine County in 1856, but also their large impact on the economy of the State of Oregon.
The first recorded discovery of gold in the State of Oregon took place in the late Spring of 1851. The discovery was made by the Lloyd Rollins party who had left the Willamette Valley for the California gold fields earlier that spring. Upon entering the Rogue Valley, the prospectors met a group of friendly Indians who told them that the shiny yellow metal they sought could be found at the mouth of a large creek some thirty miles to the west. The natives led them along what is now roughly the same route as Redwood Highway to the confluence of what is now Josephine Creek and the Illinois River. Here, Rollins and his companions “found color” and also made a second discovery on what is now Canyon Creek, which is a major tributary of Josephine Creek. Traveling with the group was also Lloyd Rollins' sixteen year old daughter Josephine, who's name was later given to not only that creek by later miners, but also to the county which they later formed. While Josephine Rollins is often referred to as “the first white female settler” in this area, the Rollins party actually continued on their way to California and it was not until many years later that Josephine Rollins was aware that her name had been given to this area.
After the Rollins party left Southern Oregon, other gold discoveries were made in this area, most notably at what came to be known as Sailor's Diggings or Waldo and also on Althouse and Sucker Creeks (both named for Philip Althouse, a native of Illinois – the “Sucker State”). Within less than a year after the Rollins discovery, conditions were such that the miners of the Illinois Valley decided that they needed some form of organization. On April 1st, 1852, over fifty miners from Waldo and Althouse met in a small clearing on the banks of Canyon Creek and drafted a mining code after the same tradition of early European miners. This was not only the first written mining law in Oregon, but also the roots of our own local government. Four years later, these same miners successfully petitioned for the creation of Josephine County.
The county proclamation coincides with the beginning of the summer mining season on local rivers and was accepted on behalf of the local mining community by Robert Stumbo and is on display at Armadillo Mining Shop on NW Vine Street in Grants Pass. 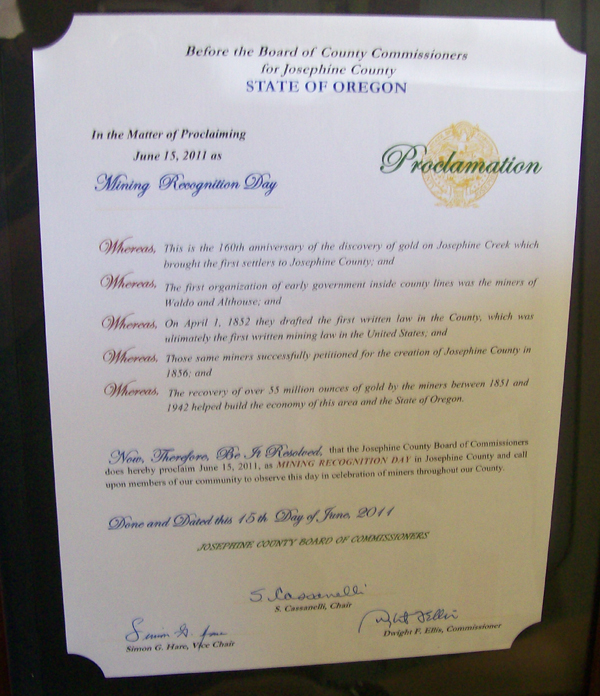 This article was originally published in Apple Rogue Times; July, 2011
Copyright 2011 by Kerby Jackson
Posted by Unknown at 7:52 PM 1 comment: